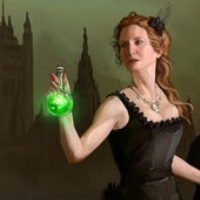 I’ve been listening to Dungeons and Daddies, a mostly-non-BDSM actual play podcast. It’s hilarious and really well done. The conceit is that four dads are drawn through a portal into the Forgotten Realms, where they have to rescue their sons from some asshole in a purple robe. This is similar to some of my first games, where my friend and I would create ourselves as D&D characters and then drop ourselves into Krynn or the world of a novel we were reading at the time. I imagine lots of people have played games like this, and Fantasy Flight even put out four games that are specifically built around creating yourself and then dropping yourself as a character into some end of the world scenario.

So I was thinking about creating real-world Backgrounds that characters could take, followed presumably by D&D 5E classes. I would like for them to be very regular, not special forces or anything. I came up with: Cashier, Barista, Sex Worker, Blogger/Vlogger, Parent, Weekend Athlete, Supervisor, Manager, Driver, Grad Student, Teenager, Technician

When this spell is cast, the caster entices up to six medium or large beasts native to the environment to approach her. These beasts are willing mounts for the next 8 hours. If a character tries to ride a beast into battle (or ride it through similar danger), she must make an Animal Handling roll at disadvantage to prevent her mount from fleeing the scene at its top speed. When traveling overland, the beasts travel about as quickly as horses.

Often players will ask for lore rolls in ordre to discover vulnerabilities in the creatures they are going to face. Sometimes, as with dragons, there just aren’t any vulnerabilities. They’re freaking dragons. Others might be vulnerable to a particular kind of damage, like a Rakshasa. Others, like demons, might just have an element or two they aren’t resistant to, which is as close as they get to vulnerability.

The thought occurred to me that NPCs could also have social vulnerabilities – the idea that certain approaches would be especially likely to work, like flattery with the President, for example, or threats against Sam Tarly. These vulnerabilities can be a simple as choosing a social skill that will work especially well against them – just Deception for someone who is credulous or Intimidation for a coward. Or it could be more specific – if you threaten someone’s family it’ll work extra well, or if you try to get them to laugh your persuasion will go even better.

I believe the game was called Song of Arda – it was a free RPG put out years ago that sought to emulate Middle-Earth, and it’s one of the more interesting attempts at doing that out there. One mechanic that it included was a “Wellbeing” mechanic – that is, a measure of how well a character is doing overall beyond whether they are wounded or fatigued. A high wellbeing is how one feels when visiting Rivendell or Lothlorien; a low wellbeing is how one feels crossing the Dead Marshes or the Dagorlad.

The idea to adapt here for 5E (or other games in similar ways) is to have recovery depend more on wellbeing than be determined by the player (rolling HD for a short rest) or full recovery (for a long rest). For a short rest, wellbeing could limit how many Hit Dice can be rolled. For example, if you are huddled under a rocky overhang in a driving rainstorm, maybe only 1 or 2 HD can be rolled, whereas if you build a comfortale camp in a cozy mountain vale, there might not be a limit.

For long rests, recovery would depend on wellbeing as a dice-pool to be rolled to recover.  Rivendell would provide 10d10, for example, whereas huddling in squalor in an alleyway might provide 2d10. I would leave it at d10s so that there’s only one variable, but I like this as an option to make recovery a bit more challenging.

As was pointed out on the Dungeons and Daddies podcast in their first or second session, D&D 5E is something like survival horror at levels 1 and 2, before transitioning more to heroic fantasy. For many players, this is a feature rather than a glitch. For others, they just start at 3rd level.

As a way to add survive-ability to characters at low levels, I thought that it might make sense to treat the various D&D 5E backgrounds as 0-levels, similar to what has been present in some previous editions and D&D clones. This also puts a level 1 character on par with a basic NPC like a town guard, who usually has 2 Hit Dice. These 0-levels would still grant max hit points, and I think I’d arrange them this way: