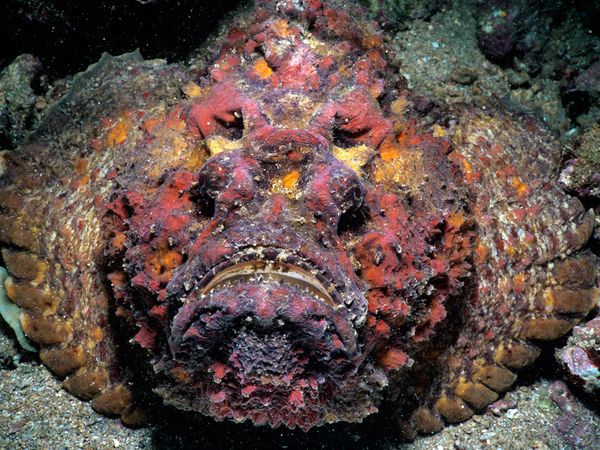 I always struggle with traps, as I’ve written here before. Hard to come up with ones that are interesting and make sense in the world’s ecology. Who built them? Who resets them? What makes them interesting? And so on.

I was watching a show about milking the venom from stonefish, and it occurred to me how living things could function as traps. I mean, a stonefish is basically a deadly trap that re-arms itself that would fit in any coastal environment.

The traps below are based on living creatures, assuming that there are fantasy versions of each of them in your setting. I’m also creating 5E rules for each that are modeled after the creature’s capabilities, including lethality, even if this contradicts weaksauce 5E rules for things like poisons.

For each of the following examples, assume that the creature in question is somewhat more potent than the ones found on Earth.

Stonefish might be encountered in any shallow salt water or estuary. These stonefish are larger than the Earth version, and their spines are able to pierce boots, though a character wearing boots has advantage on their saving throw. A DC 15 Survival roll will reveal the presence of a stonefish if a character is searching the area. Otherwise, they are easily mistaken for a stone and might be stepped on by any character. When stepped on, their victim must make a DC 20 Constitution saving throw, taking 5d10 poison damage on a failed save and half as much on a successful one. They pain also causes one level of exhaustion on a failed save. This exhaustion can be relieved by a DC 15 Wisdom (Medicine) check to treat the wound immediately after it occurs.

AKA fiddle-back, brown spider, or reaper. When bitten by a recluse spider, a character must make a DC 15 Constitution saving throw, taking 3d10 poison on a failed save and half as much on a successful one. On a failed save, after an hour has passed, the character must make a second Constitution save against a DC of 20 or take 3d10 necrotic damage and have their maximum hit points reduced by that number. This reduction can be negated by lesser restoration or a similar spell. If the bite is treated with a DC 15 Wisdom (Medicine) check, this necrotic damage is avoided.

This might be a large Fantasy box jellyfish but the normal ones can be fatal on their own. They are translucent, and hard to see, requiring a DC 15 Perception check to notice floating nearby. Their trailing tentacles have a reach of 10 feet to entangle a swimming creature. Once entangled, the victim must make a DC 18 Con save or take 3d10 poison damage and becoming poisoned, or half damage and no poisoned condition with a successful save. Escaping entanglement requires a DC 15 Strength (Athletics) check. If a creature begins it’s turn entangled it takes another 1d10 poison damage.

The sting of a single bullet ant has been described as a 12 hour tsunami of pain, and bullet ants live in colonies of 1,000 to 3,000 individuals. A bullet ant swarm only fills a 5 foot square, and can move 20 feet per round.

This description has more to do with the legend of the piranha instead of the actual fish. Blood in the cloudy water of a river is enough to attract this school of fish which functions as a swarm. The swarm is 20 feet square and has a swim speed of 30 feet. When a creature starts it’s turn adjacent to the swarm or enveloped by it, they must make a DC 15 Strength save or take 2d10 slashing damage.